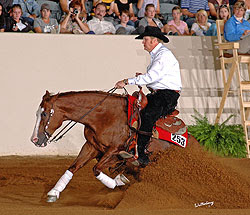 Set in a beautiful arena and in front of a capacity crowd, the 2011 FEI World Reining Final was an electric atmosphere at Bökebergs Gård, Sweden, just outside of Malmö. The best reining horses in the world contested the highly coveted title and Tom McCutcheon of the United States was flawless in his effort to the top of the podium.

Riding Darlins Not Painted to an extraordinary score of 229.5, McCutcheon - the double-Gold medalist at the 2010 Alltech FEI World Equestrian Games - added another Gold medal to his impressive resume and continues his dominance of international high-performance reining events. Darlins Not Painted is owned by Turnabout Farm.

In the Silver medal position, also from the U.S., Craig Schmersal aboard Miss Lil Addy Tude, owned by KC Performance Horses, gave the crowd a thrill with an incredible score of 227.5. Schmersal, showing on the mare at only the second FEI Reining event, had nothing but praise for his mount, and the attractive American Quarter Horse was one of the crowd favorites from the first horse inspection.

Rounding out the medals podium was the always-strong Bernard Fonck, representing Belgium and riding Great Sunburst. The pair earned a Bronze position for their effort and a score of 226.5. Great Sunburst is an American Quarter Horse and is owned by Manuel Bonzano of Italy.

In the restricted division, it was Rieky Young of The Netherlands in the Gold medal position riding Brady Chex, owned by Brady Bunch, with a score of 220. In Silver, Nico Hörmann of Germany aboard Custom Blackberry, owned by Riccardo Abati, turned in a solid score of 217.5. And in Bronze, Fenna Elzinga of Denmark rode her own Smoking Kills to a score of 216.5.

Long lines of excited fans queued up outside Bökeberg arena and the reining athletes did not disappoint. Spotless runs and precise maneuvers made the scores very high and the crowd rewarded each rider with jubilant praise. The event was declared a success by organizers and has received very positive feedback from attendees, athletes and sponsors. The people of Sweden made each and every visitor feel welcome, and the facilities, field of play and event planning were lauded by the top riders.

Reining is a sport born of the American West with maneuvers similar to those a working ranch horse might have been asked to perform on day-to-day tasks. Today, the sport has exploded around the world as the level of technical sophistication and horsemanship style has evolved into an intricate and beautiful display of power and finesse.

Now represented on six continents and in more than 40 nations, the sport of reining is an internationally approved event under the FEI, the international governing body for equestrian sport. The incredible success of the sport at the recent 2010 Alltech FEI World Equestrian Games (WEG) gave Reining significant momentum for continued growth worldwide.

For full results and links to videos of the top runs, visit www.Malmo2011.com. For more information on the 2011 FEI Reining World Final, please contact Brad Ettleman of HorsePower, Inc., the official Organizing Committee, at Brad@HPowerInc.com or 720.982.3574.

Here is the Youtube link to the gold medal run. WOW!