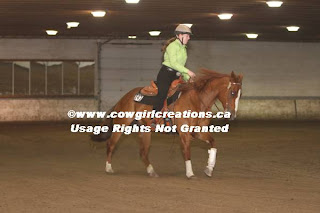 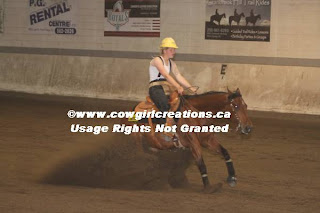 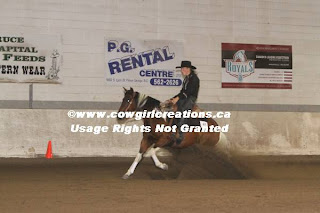 Pictures-Cowgirl Creations-from Prince George
Top- Veronica Blatter
Middle-Elli Meinert
Bottom- Casandra Jakubiec
Some congrsatulations to some of our Slider members, who have seen success in the show pen this season.
Dawnna Monks-scored a 70, and won the Beginner A Class at WCRA "Riverslide in Kamloops. Dawnna continues to show at a rate that would make most people's head's spins, having success in literally every event she competes in! Barrels, gymkhannas, and reining. She is a true inspiration and a great role model as our club president.
Veronica Blatter- Ronnie has done well with her new horse, competing in the Prince George shows, as well as at Riverslide. She gets stronger with every class, and has now qualified for the BC Summer Games! Good luck, Ronnie!!
Elli Meinert- Ellie has also done well in the show pen this season, with 70 scores, as well as competing with her new 3 year old filly. Most recently, she won the Beginner Freestyle in Prince George, with her rendition of "YMCA"
Casandra Jakubiec- despite the fact that she underspun by a quarter turn, Casandra was really pleased with her freestyle performance on Jewel, getting her best score ever of 73, and plusing her stop. She continues to work as Sherri's Thomson's riding assistant at the shows.
Posted by Isabella at 2:24 PM No comments: 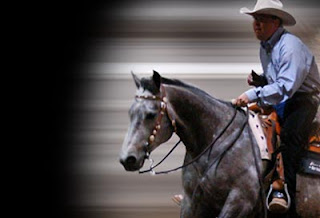 (Picture-Clay Webster-taken from Clay's website)
100 Mile Sliders are proud to announce that we will be hosting a Clay Webster clinic, August 20-21st, at the beautiful Easy Go Ranch in Lac La Hache .
All spots are currently full, but if you are interested in participating, , please contact Tiffany Vaughn (tiffany-vaughan@hotmail.com, or Mandy Pincott (mpincott@live.com), to be put on a waiting list.
Clay Webster is one of Canada's premiere reining trainers, and he highly sought after for his popular clinics.
"Clay is a highly regarded clinician and speaker. He conducts several clinics each year and has been invited to teach his clinics at such prestigious equine extravanganzas as  as the Mane Event in Chilliwack, BC, and Farmfair at Northlands Park, Edmonton, AB. He is an active competitor in horse shows of locals and international status."
Visit Clay's website to read more about his show success, and clinic program.
Posted by Isabella at 2:00 PM 2 comments: