Given the fact that spring is just around the corner (no, really...it is), and we will soon be seeing new foals out in the fields, I thought I would take the opportunity to showcase some of the reining industries hottest stallions that are currently dominating the world market and setting trends in the industry. Although most of us will never have the opportunity to own any of the get from these stallions, it is good practice to know which bloodlines are currently popular, and if you are in the market for breeding or buying, the closer up you can get these stallions on your papers, the more marketable and valuable your reining prospect is likely to be. The first stallion I chose to spotlight is:
WIMPYS LITTLE STEP 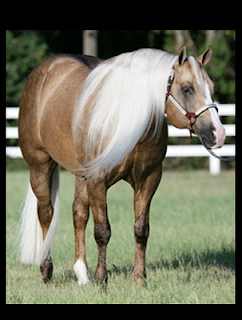 The following text is taken from Wimpys Little Step website:

"Wimpys Little Step is quite simply a reining phenomenon. During his three year old year, this bionic stallion captured the interest of the reining industry when he won both the 2002 AQHA Congress Open Reining Futurity and the 2002 NRHA Open Futurity with Shawn Flarida in the saddle. In doing so, Wimpys Little Step earned over $185,000. He is only the second horse to win both the Congress and NRHA Open Futurities."

In this clip, Shawn Flarida talks about his futurity run as well as his admiration for Wimpys Little Step 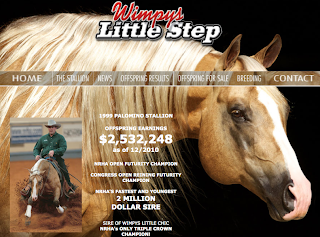 The true test of any stud horse is the ability to out produce himself. Wimpys Little Step has certainly proven his ability in the breeding pen.

Wimpys Little Step has stepped up in a big way and, in just his first year as a breeding horse, had sired six NRHA Futurity Open finalists, including a Futurity Champion. The stand-out's first foal crop produced 32 money-earning offspring, bringing in a combined $750,000+

Wimpys Little Step made history at this year’s Carolina Classic Derby, held May 13-16 in Williamston, N.C., when his offspring surpassed $2 million in NRHA earnings. The flashy palomino stallion joins eight of NRHA’s leading stallions as a Two Million Dollar Sire and is the youngest – by a margin of five years – to attain that status.

Wimpys Little Step is owned by Xtra Quarter Horses, Purcell, Oklahoma, and is by NRHA Million Dollar Sire Nu Chex To Cash and out of Leolita Step." 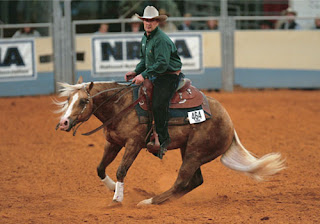