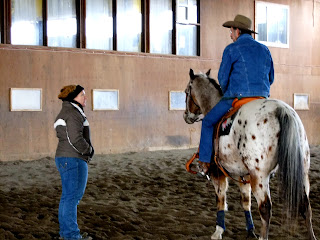 This exerpt below was taken from Equine Canada's Web Site.
CONGRATULATIONS, Lynda!!
"Following the Reining Judges’ Clinic on January 27-28 at the Equine Canada Convention, Canadian Reining Committee (CRC) pleased to announce four new reining judges in Canada. The clinic was the first one offered by Equine Canada to accredit judges for sanctioned reining competitions. The course educated future judges in the scoring system for reining as adopted by Fédération Équestre Internationale (FEI). The curriculum and testing protocols were developed in conjunction with The Reining Horse Association of Germany and were presented by Gary Yaghdjian and Bernie Hoeltzel.

The first reining recorded judges are Sherri Whitworth of Rockwood, ON; Lorraine Gilchrist of Asquith, SK; and Lynda Smith of Pitt Meadows, BC. Beth Hora of Moose Jaw, SK was granted senior status as she is also a National Reining Horse Association judge.

“It was integral to keep the level very high in accordance with the industry standard. Reining has the most intricate and transparent judging system with all score sheets posted for exhibitors to review at the conclusion of each class,” said Yaghdjian, who is also the chair of the CRC. “We are very pleased that the following candidates were successful in attaining the prerequisite 80 per cent passing grade. Congratulations to our new judges.”"

Clink on the Equine Canada link above to view the entire article.
Posted by Isabella at 11:18 AM