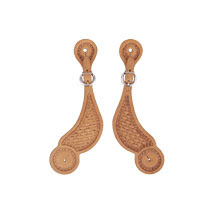 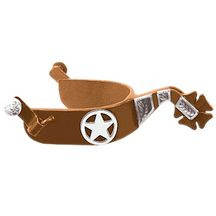 Pictures-
1. Typical "wide" spur straps
2. A thin band spur
3. A spur with a longer shank
4. A spur typically seen worn by reiners
I have been contemplating riding with spurs lately and was looking for some information. I have never felt I was an "educated" enough rider to wear spurs, but now, riding Jewel, I'm hoping I can get a better response from her, having been trained and rode with spurs. I hope I can use them properly, and not bump and bang my leg against her unintentionally when I ride....Once again, Lynda Smyth's forum was the place I found the answers I was looking for. I thought it might be useful information to share here...
Here is the original question(s) (actually posted by our WCRA president) and Lynda's response in part...to see the whole conversation, go to Lynda's forums.
What's the proper way to fit spurs on a boot? i.e., do they fit around the actual heel of the boot? or higher up, around the boot itself? Should it be snug enough to "grab" the boot, or should it be loose enough to allow some movement? Should the leather strap be tight across the instep?
There are different types and weights of Western spurs. It is the weight and the width of the band that determines how the spur is put on.

Wide bands are preferred in Reining circles. The wide band sits on the heel of your boot and yet high enough to touch the leather.

The spur is suppose to be loose not tight against your boot heel. This will allow the spur to fall back into place, if it gets moved around. The 'rolling up' action of the spur, causes it to push against the heel of your boot, and therefore stay on your heel.

Some cowboy boots have slanted heels. A wide band spur will not work properly on these boots, but you can tighten up the spur strap and have the spur sit on the boot leather, above the heel.

Narrower banded spurs can be worn, slipped into the space where the heel meets the leather of your boot. If the spur is snug or not, you may still need to add rubber spur keepers, that wraps underneath your boot heel, to keep the spur in place.

These thin band spurs are very common because they usually have short shanks and mild rowels. Most of these require some type of 'under boot strap' to keep them in place.

The shank is the part of the spur that sticks out. Longer shanked spurs are for people with long legs. With the long shank, they don't have to wrap their legs quite as far under the horse's belly to reach it. Short shanked spurs are for shorter leg people and riders who want to move their leg a lot, without touching the horse with a spur.

Rowels are the rolling part at the end of the shank. Western spurs are meant to be used in a 'touch and then roll action' ... that's why there are rowels. A horse is far most likely to move away from a 'tickling' rolling rowel and far more likely to brace up against, a spur that just kicks him in the belly.

There is a huge variety of rowel size and shape available. You can probably tell which ones are more mild than others, just by looking.

Spur straps are the strap that hold the spur in place. The wider 'cowboy' straps, are far more comfortable to wear than the thin type that cut into your foot.
I use the same set of spurs on each horse that I choose to wear them on. I sometimes cover my rowels with duck tape for the young'uns, until they get used to the sensation.
I start to use spurs on a horse when I have to kick them, to get them to move off of my leg ... as in a leg yeild. I do not use my spurs in a kicking motion but rather in a rolling motion to tickle and irritate them.
Posted by Isabella at 11:55 AM