The reining world loses a superstar 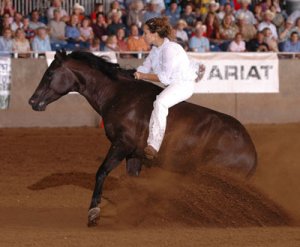 The following information is taken in part from Stacy Westfals Horse Blog. You can read the whole story by clicking the HorseBlog Link.

Heaven’s remuda improved by one fine mare on February 8, leaving this planet one short, with the passing of Roxy (aka Whizards Baby Doll), best known as horsewoman Stacy Westfall’s bareback and bridleless mount.  She sustained traumatic injury after apparently becoming cast in her stall sometime during the night of Feb. 5. Many will best remember Roxy from a video that went viral on the Internet in which Stacy rode her with no bridle or saddle, winning the Freestyle Reining Championship at the 2006 American Quarter Horse Congress.  The performance, coming less than a month after Stacy’s father passed away, touched an appreciative audience worldwide.  One person quite moved by the ride was TV personality Ellen DeGeneres, who invited Stacy and Roxy to appear on her show.  Roxy, ever the lady, gave Ellen a memorable ride, and charmed the live studio audience by coaxing peppermints from Stacy.
...

A registered American Quarter Horse, Roxy (by Whizard Jac out of a daughter of Gunners Rambo) leaves behind a legacy of four offspring, all of whom were carried by recipient mares.  But perhaps her greatest legacy is the glimpse of what is possible between a horse and a human — the image of she and Stacy, forever imprinted in the minds of those who have been lucky enough to witness them — two creatures, human and horse . . . bound by trust and love.


“What made her special was that she was willing to give so much of herself,” says Jesse Westfall.  “She allowed herself to be developed into an amazing partner, a work of art.  Not many horses, or people, are willing to do that.”
You can watch Stacy and Roxy's famous performance here
Posted by Isabella at 8:51 AM

Labels: Condolences, On the International Scene