Not Really Reining Related but a feel good horse story... 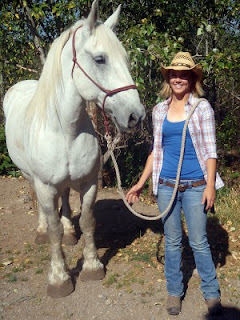 Picture: Erin Bolster and "Tank" (taken from the article link below)

I came across this article this summer from a Facebook post. Here is part of the article. To read the whole thing click on the article link.

That's how she went to work that day: a young but seasoned pro rider on a new, huge and spirited horse, unarmed in the wilderness with eight dudes.
"It was a pleasant ride until we came around a corner on the trail and my horse stopped firm and wouldn't move," Bolster said. "He never refuses to go, so that caught my attention quick."
But not fast enough to avoid the spike white-tailed deer that burst out of the brush and glanced off Tonk's left front shoulder.
As Tonk spun from the impact, Bolster saw a huge grizzly bear crashing through the forest right at the group in pursuit of the deer. Horses panicked and guests grabbed saddle horns for the ride of their lives.
"No amount of training could keep a horse from running from a 700-pound charging bear," she said.
Seven of the horses sensed the danger, peeled out and galloped back on the trail toward the barn.
But Scout bolted perpendicular to the trail into the timber, packing the 8-year-old boy.
"The deer peeled off and joined the horses sprinting down the trail," Bolster said. "So the bear just continued running right past me. I'm not sure the bear even knew the roles had changed, but now it was chasing a horse instead of a deer."
The grizzly was zeroed in on Scout and the boy - the isolated prey in the woods.
Adding to the drama, the boy's father, an experienced rider, could not convince his horse that it was a good plan to ride to his son's rescue.
"The last thing he saw over his shoulder as his horse ran away was the grizzly chasing his boy," Bolster said.
With the bear on Scout's heels, Tonk's instinct was to flee with the group of horses. But Tonk responded to Bolster's heels in his ribs as she spun the big fella around. They wheeled out of a 360 and bolted into the trees to wedge between the predator and the prey.
"The boy was bent over, feet out of the stirrups, clutching the saddle horn and the horse's neck," she said. "That kept him from hitting a tree limb.
"But all I could think about was the boy falling off in the path of that grizzly.
"I bent down, screamed and yelled, but the bear was growling and snarling and staying very focused on Scout.
"As it tried to circle back toward Scout, I realized I had to get Tonk to square off and face the bear. We had to get the bear to acknowledge us.
"We did. We got its attention - and the bear charged.
"So I charged at the bear."
Did she think twice about that?
"I had no hesitation, honestly," Bolster said. "Nothing in my body was going to let that little boy get hurt by that bear. That wasn't an option."
Tonk was on the same page.
***
With a ton of horse, boulder-size hooves and a fire-breathing blonde thundering at it, the bear came within about 10 feet before skittering off to the side.
But it quickly angled to make yet another stab at getting to Scout and the boy - who had just fallen to the ground.
"Tonk and I had to go at the bear a third time before we finally hazed him away," she said.
"The boy had landed in some beargrass and was OK. Scout was standing nearby."
Bolster gathered the boy up with her on Tonk, grabbed Scout's lead and trotted down the trail.
"The boy was in shock," she said. "I looked back and could see the bear had continued to go away through he woods, but I had another five or 10 minutes of riding before I got back with the group."
Not until she reunited with her riders - all OK and standing in various stages of confusion with their horses - did she start to shake.
"I looked at Tonk, and he was wet with sweat and shaking, too," she said.
She was especially concerned for the boy's father, who probably suffered the most terror in the ordeal.
"He was fine, and I got my biggest tip of the season," Bolster said. "My biggest hope is that the boy isn't discouraged from riding. This was a one-in-a-million event."

What an awesome story! Then, a couple of weeks ago, I saw this link on David Letterman, who had also heard of the story and chose to interview her on his show. You gotta watch!
Posted by Isabella at 11:38 AM