Looking for a little CRUZ Control??

Marcel and Amie Cruz burst on the reining scene in BC in a big way last year, and are making their mark both in BC and internationally.
Here is their Bios taken from their website:

Marcelo Cruz started breaking horses as a young boy on his family's ranch in Brazil. Competing in several disciplines as a youth such as Classic Jumping and Manga-Larga gated ponies. At the age of 16, he attended his first reining clinic and was hooked. Over the years, he has studied under top class reining trainers including Casey Hinton, Pete Kyle and Pierre-Luc Phaneuf. Showing under the guidance of Phaneuf, Marcelo was the Limited Open and Rookie Professional circuit champion.

Amie Cruz started off her career in the hunter ring at the age of 8. In 2001 she developed an interest in reining and in 2003 she was offered the opportunity to work for Roberta McCarty where she achieved success in the show pen. Amie's resume also include top trainers Pete Kyle and Pierre-Luc Phaneuf. Amie excels in the coaching and training of riders and their horses, from a beginner level to the advanced non-pro competitor.

Check out the CRUZ CONTROL VIDEO LINK IN YOUTUBE, including this amazing 75 score run from last years WWC on CHICS LOADED GUN 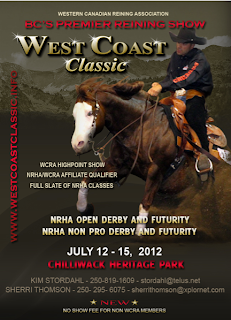 WE ARE SORTING OUT PRICES AND DETAILS FOR THE CLINIC, BUT EXPECT TO FILL UP QUICKLY, SO PLEASE CONTACT MANDY (mpincott@live.com) TO BOOK YOUR SPOT! MORE DETAILS TO COME SOON!
Posted by Isabella at 12:04 PM