So What is Reining?? 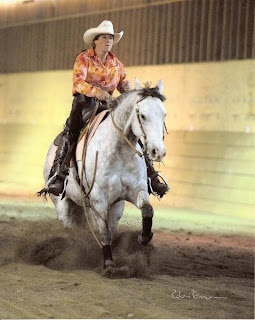 (Picture-Trainer and WCRA Open Competitor, Sherri Thomson, and her AQHA Gelding, "Topper")
Reining is designed to highlight the athletic ability of the "Ranch type" horse in the confines of the show arena. Contrary to the seemingly relaxed attitude of the horse and rider, and the loose reins typical of the discipline, reining is a high level competition sport requiring concentration, athletic prowess, control and speed. As is stated in the National Reining Horse Association (NRHA)  Handbook, "to rein a horse is to not only guide him, but also to control his every movement. The best reined horse should be willingly guided or controlled with little or no apparent resistance and dictated to completely. Any movement on his own must be considered a lack of control. All deviations from the exact written pattern must be considered a lack or temporary loss of control and therefore a fault must be marked down according to the severity of the deviation. After deducting all faults against the execution of the pattern and the horses overall performance, credit shall be given for smoothness, finesse, attitude, quickness and authority of performing various maneuvers while using controlled speed which raises the difficulty level, and makes the run more exciting and pleasing to watch to an audience."
Reining has become the most recent discipline to be recognized by the Federation Equestre Internationale (FEI). International reining competitions are now being held for both team and individual competitors world wide. Reining was included as a medal discipline for the first time at the 2002 World Equestrian Games in Jerez, Spain. At the 2006 FEI World Equestrian Games, the Canadian reining team earned the silver medal for the team competition, and Duane Latimer took the individual gold for Canada. In 2008, former Williams Lake reiner, (currently from Kamloops, BC) Amanda Self, was named to the Canadian Reining team and competed at the World games in Italy! Amanda is a long standing member of the WCRA and you are sure to see her at the WCRA shows competing in reining and working cow, at the open level with her gorgeous APHA gelding, "Marv", along with numerous client horses!
While reining is recognized by the FEI and performed at the World Equestrian Games, it is not yet recognized as an Olympic Sport.
For more information on the sport of reining, visit the National Reining Horse Association Website at http://www.nrha.com
Posted by Isabella at 11:52 AM