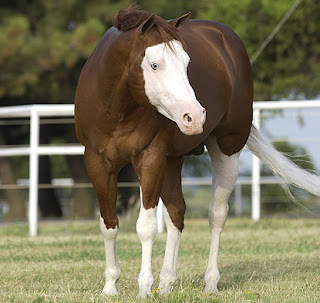 I couldn't do a stallion Spotlight without including at least one APHA stallion. "Gunner" made a name for himself in the APHA world before he hit the big time. He was double registered as an AQHA stud when the white rules were relaxed, and was registered with AQHA as Colonels Smoking Gun. It was there that he hit the big time taking the NRHA circuit by storm. The following information is taken from his website, where he currently stands at McQuay Stables, in Texas. Click on the image for a larger view. Note his 2011 stud fee: 8,500.00!! 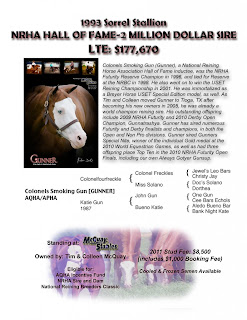 This is another sire that has proven his worth by out producing himself. He puts his stamp on his babies that are often recognizable by their big white face, and "floppy" ears. Gunner was deaf, and despite this genetic flaw, which he frequently passes on to his offspring, his babies are still highly in demand in the reining world.

This is a You Tube Clip of Gunner in his semi final run at the USET semi finals.

We are lucky to have a Gunner son standing in our midst, as Jill Hamming of our WCRA Kamloops Chapter is currently standing BH Gunners Enterpriz, aka 'Rex", an own son of Gunner.

According to Jill's Facebook page, "Rex" is a proud father of 4 2011 fillies, all with the splashy paint color, passed down through those strong Gunner genes!! Be sure to look for Jill and Rex at all the WCRA/NRHA sanctioned shows!
Posted by Isabella at 1:55 PM