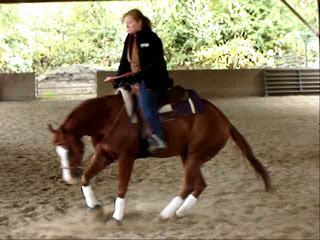 Pictures (Courtesy of Lynda's facebook page Lynda with some of her prospects.
Bottom Picture-Lynda, and Sherea Williams 2010 prospect "Suddenly Smart"
Here is a some information on Lynda Smith, who will be conducting a reining/horsemanship clinic, in 100 Mile on April 9/10, and then judging our Reining Schooling show on April 11th.
Lynda Smith attained her Western Coaching Level 1 in 1997. In 1998 & 1999 she apprenticed with an established Reining Horse trainer. Also in 1999, Lynda Smith and APHA 'Justin's Tyke' were named WCRA Open & Novice Horse Open Champions. She also won the BCRA Breeders Classic 3 yr. old Futurity on 'Docz Sunup Play'.
The fall of 1999, saw Lynda move to the Lower Mainland of BC, to start her own business, Mane Stream Reining. After spending countless hours traveling, to teach Horsemanship to all that would listen, Lynda was honored by the Horse Council of BC as "Coach of the Year 2000". She successfully completed her Level 2 Reining Coach certification in 2001.
Competing on National and International levels, Lynda Smith has proven herself as a competitor winning a number of Open Reining Championships through 2007. Notably, competing in the NRHA Futurity 2002 on 'Lacys Dun Dual'n' then the pair earned 5 Reining Canada Top 10 honors in 2003.  WCRA Open awards in 2004 with 'Ole San Cocoa Lena', then 3 Yr Old Futurity Wins on 1/2 Arab "Miss Mellie" & Appaloosa "Savanna Jackson" against a field of Quarter Horses in 2007.
As a coach, Lynda has encouraged over 160 riders to enter the Reining pen and become a part of the sport.  From Green as Grass beginners through Rookie to Non-Pro, she has produced calm, focussed riders who excel at their levels.  Lynda's patience and clear explanations make her riding lessons and clinics an exciting learning experience.
After a 2 year break from riding and training, 2010 has seen Lynda return to the Reining world. She currently has 15 regular students in the Lower Mainland of BC and is finishing AQHA "Suddenly Smart" (owned by Sherea Williams) to be her Open competition horse this year. Lynda Smith is a certified EC Level 2 Reining Coach. She is the process of becoming certified to EC Level 3 Reining as well as pursuing her NRHA Judges Card.
Posted by Isabella at 12:41 PM