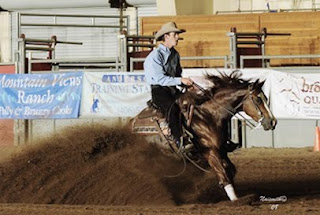 In addition to Shawn Flarida riding a Canadian owned horse into the Open Finals at the NRHA Derby in Oklahoma City, Casey Deary and Elanachics, owned by Reinbow Ridge Equestrian of Schamberg, AB, Canada, have also made the Open Finals. Canadian trainer Jesse Beckley of Cranbrook, BC and Mizzen Whizzen (owned by Marilyn Copland of Victoria, BC) have made the Intermediate Open Finals. Good luck to all!

Labels: accomplishments, On the International Scene