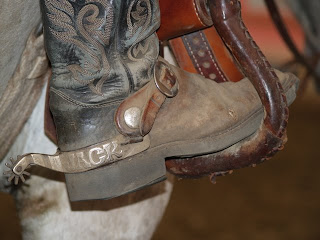 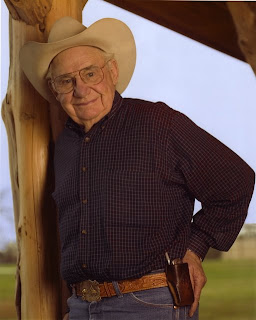 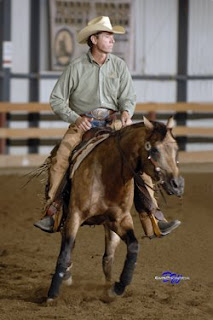 (Pictures)
Top-Jack's spur-a great example of a reining spur on a boot!! (see post on "spurs"
Middle-Legendary Horseman, Jack Brainard
Bottom-Million Dollar NRHA rider/trainer, Craig Johnson)
The Cardinal Ranch, (http://www.cardinalranch.com/#) located just outside of Valemont (1 hr west of Jasper) is hosting 2 awesome reining clinic opportunities:
1. August 28-31st, the legendary Jack Brainard will be conducting an Advanced Horsemanship/Reining Clinic.
"Jack Brainard is in his eighties, and his list of accomplishments are impressive, but most impressive is that he still rides many of the world champion horses today.  We are told that if some of the best in the world still come to Jack if they are having problems with lead changes.  (We are also told he still rides the colts too!)
In 1966, Jack organized the National Reining Horse Association, and served as one of the original directors! You can read more about Jack on his website:
http://www.jackbrainard.com/index.html
Cost is: Riders 1,000.00 for 4 days
Auditors (was unclear but)-either 3, or 400.00 for 4 days, or 75/day
2. September 5-7, million dollar NRHA rider and trainer Craig Johnson will be conducting a "Fundamentals of Reining" clinic.
A little bit about Craig...

Craig Johnson's special brand of reining excellence combines total precision with lightning maneuvers. His is a unique style that has been well rewarded in the arena.

Craig has also represented the United States in Jerez, Spain at the World Equestrian Games. The U.S. came home with the Gold Medals! Craig has been on three Gold Medal teams, brought home three individual Silver Medals and one Bronze Medal.

You can read more about Craig on his website: