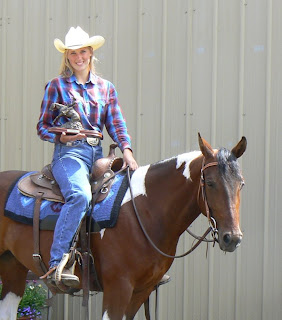 (Picture-Casandra Jakubiec -(my daughter!) and PR Impressive Jewels (born and bred right here in the Cariboo-Painted Rose Ranch-Thanks Ron and Ceci!) Kamloops, 2007 NRHA beginner winner)
Here is a list of the 2009 Shows on the High Point Series for the WCRA. You get points for each show you attend, and place in WCRA classes. The points add up for year end awards at the annual banquet, held each fall. WCRA provides awesome prizes for shows and for high point winners.
May 8-10, 2009
Peninsula Rockslide
Saanichton, BC
This show is the long standing first show on the WCRA circuit, and the island club always puts on a great show! A full slate of WCRA classes, as well as open, non pro, and youth classes, and NRHA approved, with an NRHA judge. The main issue for some of us folk up here, is the cost of travel to the island. Hopefully, once we are up and running, we can cut costs to this show by buddying up with trucks and trailers as well as accommodation costs. You can get more info on this show at  http://www.peninsulareiningclub.com
June 12-14, 2009
Riverslide
Kamloops, BC
This show will be part of the high point series. More information will be forthcoming, and I will post info here as soon as it is available. You can also check the WCRA website for updated information
July 17-19, 2009
WCRA West Coast Classic
Heritage Park, Chilliwack
This is one of the ""big" shows held at the fabulous Heritage Park in Chilliwack. A sanctioned NRHA show, 2009 Adequan North American Affiliate Champonship Program, that often attracts the "big guys" from Alberta, BC and the States. If you want to learn more about reining, its a good one to go and watch! Also, a full slate of WCRA classes
Sept 11-13, 2009
Slide Out West
Heritage Park, Chilliwack
Another great show at Heritage park, hosted by our lower mainland chapter, and the last of the high point series. Most of the horses and riders are at the peak of their game, and working to get their last chance at chasing points for the high point awards.
Here are some other reining shows and clinics to consider that are not part of the WCRA high point series, but great opportunities to get out and compete and learn.
March 21-22, 2009
Carl Woods Reining Clinic
Easy Go Ranch, Lac La Hache
1-888-600-7556
Carl is a professional reining and working cow horse trainer. He will be conducting 1 hour private lessons for the low cost of 40.00/hour!
May 23rd 2009
Sherri Thomson Training
Introduction to Reining and Horsemanship Clinic
100 Mile Agriplex
Sherri has offered to conduct a series of reining/horsemanship clinics right here in 100 Mile! Sherri is a reining and working cow horse trainer who shows throughout BC in Open Reining and Working Cow Horse. She has conducted numerous clinics and is known for getting the best out of each individual  horse and rider. You will see Sherri featured throughout this blog, as she has been our long time trainer and good friend. Sherri has just been nominated for a lifetime achievement award through ProMotion Plus, for the work she has done mentoring young girls, and training horses (and people) in the sport of reining! Cost of the clinic for a full day of riding with Sherri is 125.00/person
April 3-5
Amanda Self Reining Clinic
Brantdt Ranch, Pritchard
Amanda is an accomplished reining trainer and rider, most recently named to the Canadian Reining team that competed at the World Equestrian Games in Italy in 2008. Her easy going manner, and great sense of humor make her a great clinician. This clinic is the last in a series of clinics Amanda has offered at the Brandt Ranch this winter. Watch Amanda's reining demo at the 100 Mile Bazaar, March 29, 2009. Amanda is a long time WCRA member and former William's Laker!
April 18, 2009 ** Note this is an updated date change (was previously April 26th)
FVRC Schooling Show
2652,  216th St
Langley, BC
Judge-Lynda Smith
This is a great opportunity to come out and show in a low stress environment. No pre entry required. Just come out and pay 15.00 per class entry You can view the lower mainland WCRA chapter's webite at http://www.fvrc.ca
Sun Reiners
Our North Okanagan/Shuswap Chapter will host a number of schooling shows as well as their third annual "Reining in the Sun" show http://www.reinininthesun.com this year:
May 2 2009
Sun Reiners Schooling Show
Armstrong Agriplex
Another opportunity to get a chance to get in the show ring in a low stress environment, and a great warm-up for the Island show the following weekend. I will post more info here as it becomes available, but watch the WCRA site as well! They also have a page update in Saddle Up magazine.
May 1-3
Prince George Reining Horse Association
Spring Slide Reining Show
http://www.pgrha.tripod.com
Held at the fair grounds in PG this NRHA approved show always attracts a lot of the big guys from across western Canada!
June 18th-20
Prince George Reining Horse Association
Ride N' Slide
Another big show hosted by our northern cousins. Often well attended by locals as well as the out of province "big guys"!
July 30-August 1, 2009
Reinin' in the Sun
http://www.reinininthesun.com
Armstrong Agriplex
This show has seen huge growth in the 2 years of its existence, with a total of 403 runs last year, and a full slate of open, non pro, and beginner classes, in reining and working cow. The show organizers emphasize a fun atmosphere, with great food, relaxed atmosphere and lots of sun!
August 7-9th
Prince George Reining Horse Association
Fall Slide
The last of the "big three" reining shows hosted by the Prince George Reining Club.
Please post comments if you know of other shows going on, or would like to hook up with someone going to these shows to cut costs and travel together!
Posted by Isabella at 10:21 AM